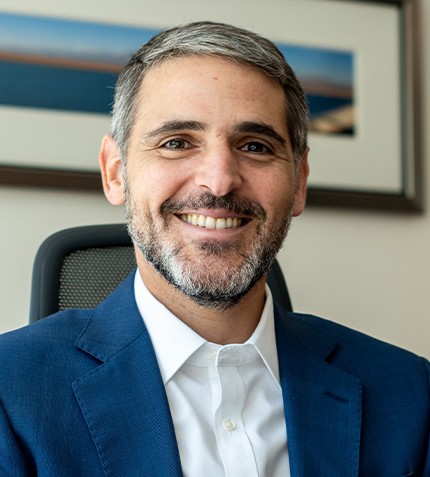 "Albemarle is excited about the creation of a national lithium company to build policy regarding lithium, create opportunities to add value in Chile, develop the value chain within the country, and also to invest more in R&D in the lithium space."

Can you provide an overview of Albemarle’s Chilean operations and production profile?

Albemarle is a pioneer in the Chilean lithium industry, having been present in the country for over 40 years. The company started lithium exploitation in the 1980s in a joint venture with the State through CORFO (Chile's Economic Development Agency). We recently finalized the expansion of our chemical commercial plant in La Negra, which will increase Albemarle’s Chilean production capacity to over 85,000 t/y of lithium carbonate. Our operation is divided into plants; at the Salar de Atacama plant we extract and concentrate lithium brine, which is then transported to our La Negra plant close to Antofagasta where we produce the final product – battery grade lithium carbonate, created specifically for electronic devices, electric cars, and safety equipment markets.

Can you elaborate on Albemarle’s investment in La Negra into thermal evaporator recycling technology?

The evaporator recycling technology allows us to reduce the consumption of fresh water at La Negra by approximately 30% per kilo of product. The plant was commissioned in 2021 and its final product is currently in the process of qualification with customers. We expect it to be fully qualified by Q3 2022. This US$100 million investment forms part of Albemarle’s commitment to a greener future and our effort to increase the sustainability of our operations.

What are your thoughts on the current discussions surrounding lithium mining in Chile?

As Chileans, we are very excited about the finalization of the draft of the new constitution to be voted on in September. Having a new constitution drafted by people elected by our countrymen is an important change. The result of the Constitutional Assembly vote on Sunday 15th May was promising, as it appears to be moderate and balanced. We hope this enables a new era of prosperity in the country.

Albemarle is also excited about the creation of a national lithium company to build policy regarding lithium, create opportunities to add value in Chile, develop the value chain within the country, and also to invest more in R&D in the lithium space. The government is open to partnerships between the public and private sectors to further develop the lithium industry in Chile.

Regarding how to add downstream capabilities to Chile’s lithium sector, It is beyond the reach of one specific company to develop the value chain and is therefore a debate that has to be taken by all actors, including the government, private sector, academia and society.

What is the latest regarding the charges levelled by Chile's environmental regulator (SMA) related to the alleged over extraction of brine in the Atacama?

Albemarle has always been committed to operate sustainably and with full transparency. We thus provided information and posed a question to the SMA to clarify some aspects that were not clear about our permits. We are convinced that we acted with full transparency and there are no infringements. The SMA did, however, press charges against us, but we are collaborating with them and have already filed our response providing additional information to the authority for better understanding.

We recently finalized the construction of our commercial plant in La Negra, which will allow us to double our capacity. We have a contract with CORFO that lasts until 2043 and will thus be in the country for the long term. There are several important conditions that we agreed with CORFO in 2016, one of which is that we pay the highest royalty or commission for lithium production in the world, which goes up to 40% of the final sale price of the product. We will contribute approximately US$300 million in R&D funding to CORFO between 2016 and 2043, which have already contributed to CORFO funding a center of E-mobility and a circular economy center in northern Chile. We also contribute 3.5% of our sales to indigenous communities.

Production growth must be achieved in a sustainable way, and Albemarle is committed to reaching carbon neutrality by 2050. We have started a journey with IRMA (the Initiative for Responsible Mining Assurance); we are actually the first mining site in Chile and the first lithium site in the world to start the self-evaluation process, and in April 2022 we finalized the third party audit at our Salar plant.