Despite a gap between industry size and apparent attractiveness, Manitoba has the makings for long-term success. 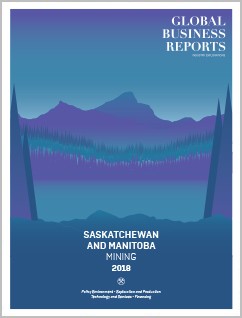 Recognized as the second top destination worldwide for mining investment by the Fraser Institute in 2016, Manitoba has captured interest amongst global mining communities and potential investors. Primary criteria factored into the survey, which ranked 104 mining jurisdictions around the world, include resource potential and policy attractiveness. When compared to other mining regions globally, Manitoba certainly ranks highly on each of these counts. However, being relatively underexplored considering its apparent wealth of resources and having been heavily hit by the industry downturn, the province’s mining sector has some way to go before reaching that light at the end of the tunnel.

Historically focused on agriculture, Manitoba’s government has been committed to diversifying the province’s economy over the years. Manufacturing remains Manitoba’s largest sector, accounting for over 12% of GDP, with mining sitting at about 5% in 2015. The province’s mining industry is largely built around its two producers: Hudbay and Vale.

HudBay, founded in 1927 as Hudson Bay Mining & Smelting Company, has played a significant role in the province, largely centered around its Flin Flon operations. Today, the company’s activities extend across the Americas, with a primary focus on the discovery, production and marketing of base and precious metals. Hudbay remains hugely important to the province, running a highly profitable poly-metallic operation, employing approximately 1,400 people as well as 200 contractors. The company’s central focus is also shifting somewhat from Flin Flon to Snow Lake with its Lalor operation. “We have been in Manitoba for 90 years, a period over which we have mined over 150 million tonnes of ore in the area,” commented Andre Lauzon, vice president of the Manitoba business unit at Hudbay Minerals. “The last year has been transformational for us. Lalor had its first production in 2012, and by last year our idea there was to maintain a 3,000 mt/d operation till the end of the mine life. Yet, we identified some opportunities to increase that by at least 50%.”

As a result, the mine is already working at a rate of 4,000 mt/d with anticipated production levels reaching 4,500 mt/d in 2018. “In terms of timing, this has been very positive due to the high zinc prices,” continued Lauzon. “We are having record production of zinc this year, and for the first time we have actually shipped zinc concentrate out of the province, even if we are running our zinc plant at Snow Lake to its fullest capacity.”

Hudbay already has three concentrator facilities: the Stall mill at Snow Lake, the Flin Flon mill and the new Britannia mill, a gold mill which is currently idle. The 777, scheduled for completion by 2020, is in harvest mode, with no further major upcoming expenditures required. Closure of the Reed mine is planned for July 2018.

A more recent addition to the market, Brazilian Vale made its entrance to the province with its purchase of Inco in 2007. Inco, a Canadian company, began exploration for nickel in the Thompson Nickel Belt (TNB) in the late 1940s. The company was a leading producer of nickel for some time, with an output of more than 2.5 million mt since the late 1950s. Since the acquisition, Vale has invested C$1.4 billion in Manitoba through a combination of sustaining capital, exploration and mining studies, including about C$61 million in exploration from 2012 to 2016.

However, the operation has encountered challenges due to the sustained downturn in the nickel price. This led to the announcement in May 2017 that Vale would suspend production of its Birchtree mine at Thompson, placing it in care and maintenance from October. Further to this, Vale will also be closing its smelter and refinery in July 2018, citing environmental regulations and a lack of local feed for processing as the key factors affecting the decision. By Q3 2018, the smelter and refinery in Thompson will be closed, replaced by a mine and mill operation.

While there is potential to extend the Thompson mine’s life of mine plan until 2044, Vale has highlighted potential barriers, such as the requested 7.9% hydropower rate increases for the next five to six years. According to Mark Scott, Vale Canada’s vice president for Manitoba operations, the requested increases would add C$10 million in expenses to the business over the next five years. Scott also highlighted carbon pricing and the province’s tax regime as further challenges to take into consideration. To demonstrate the company’s economic impact, Vale commissioned a study which shows a total economic impact of C$7.9 billion to the province if the life of mine is extended until 2044.

Going forward, Vale is focusing on exploration on existing mines, particularly at the Hangingwall resource zone, targeting extensions of known deposits, in-mine satellite deposits and new resource zones both north and south of existing mines. Vale is also investing C$80 million in a concentrate load-out facility that will enable the company to start shipping the product for processing at its facilities in Ontario and Newfoundland and Labrador from July 2018.

Underscored by challenges experienced by Vale and Hudbay’s shifting focus away from Flin Flon, the need for Manitoba to attract investment and establish new mines is clear. “Vale and Hudbay were established decades ago, and then there was a huge gap in investment, so we are looking at setting up a regime that will make up for that gap and allow investment to come,” commented Blaine Pedersen, Minister of Growth, Enterprise and Trade.

Demonstrating its commitment to facilitating a favorable operating environment, Manitoba’s government is developing a Mineral Development Protocol and reducing red tape where possible. “Our main message is that Manitoba is open for business,” said Pedersen. “Our finance department did a review of the number of regulations in place, and it turns out that we have more than 900,000. There are many redundant regulations within every department, which is something that affects businesses. We are consulting with the business community to find out which regulations are burdensome for them.”

Government support and maintaining an open dialogue with industry will be key in furthering the industry. “Manitoba has huge potential,” emphasized Ashley Kirwan, vice president and senior geologist at Orix Geoscience, a consulting firm specializing in geoscience services for exploration companies. “It is a vast province and only a fraction of the land has been explored in depth… This is the best time to branch out into Manitoba as there are undoubtedly deposits still to be found. In addition to nickel, copper, zinc and gold exploration, commodities like lithium and cobalt are going to gain a lot of traction.”

Indeed, Manitoba’s potential for clean energy resources, which have high demand projections, make it an attractive prospect for new exploration ventures. Andrea McLandress, executive director at the Mining Association of Manitoba, said: “Today, the federal government wants to push the transition towards clean energy technologies, while China is promoting the big switch to renewable energy and electric vehicles. All the main components can be found in Manitoba: copper, zinc, nickel and lithium. We want to promote a vision of ‘Manitoba mining for clean energy technology’. It is a very exciting message for investors as well as for our own local and indigenous communities.”

With a clear message from the government in place and proven resource potential, attracting investment and driving exploration are the next steps for the province in fostering a strong mining sector. “We are coming out of nearly two decades of NDP government, and the new conservative government is focused on promoting business,” highlighted Norman Snyder, managing partner at Taylor McCaffrey LLP. “If the carbon tax is an issue here it is because we are dealing with it now; at least we will have some certainty about the taxation framework that other provinces do not have. We expect to see more support for businesses, but it is a big task – the ship cannot be turned overnight.”

However, while many of the pieces of the puzzle are in place, Manitoba lacks advanced exploration projects, meaning a lag in traction and new mine development in the foreseeable future. Nevertheless, with continued focus from the government and an uptick in mining investment imminent, the province has all the makings for success in the longer-term.